A leap to advanced sewage treatment for India

India has come a long way in the last decade as far as treatment and discharge of sewage treatment plants (STPs) are concerned.

The country is taking commendable steps, having built more than 800 STPs in the last six years and tightening discharge limits. Strict requirements for plant discharges were set by the National Green Tribunal in April 2019 and were upheld by the Supreme Court of India in June 2021. These discharge standards are at par or even more stringent than those of many developed nations, sending a clear message that the country is serious about improving the quality of its water bodies. This will safeguard the country's health and environment and set the scene for reusing treated wastewater and sewage sludge according to circular economy principles.

India is home to 1.31 billion people and has been undergoing rapid urbanisation in the last two decades. This has resulted in a considerable increase in its metropolitan population, now representing over a third of the country's residents. Consequently, sewage generation in India's cities has also grown, along with the infrastructure of sewerage networks and sewage treatment plants (STPs) designed to accommodate it.

Sewage generation and treatment for Class I and II cities

A whopping 815 new STPs have been built or proposed in the last six years, doubling the country's STP count in 2015 and drastically affecting the percentage of sewage treated in the last decade. In 2021, more than 50% of the sewage generated in urban centres was treated, up from 37% in 2015 and 30% in 2009. The pace with which new sewage infrastructure is catching up with sewage generation clearly indicates the government's intention to manage the country's sewage discharges responsibly.

Besides enlarging its infrastructure base, India also ensures that its wastewater is treated properly before releasing into the environment. Before 2015, discharges from STPs were governed under the General Standards released under the Environment Protection Act and issued by the Central Pollution Control Board (CPCB), an organisation under the Ministry of Environment, Forests & Climate Change (MoEFCC). These standards dictate the maximum limits for discharges and include limits for BOD, ammoniacal nitrogen, and other pollutants such as pH, TSS, COD, nitrates, etc. Some municipalities imposed limits for additional pollutants and tighter limits for some of the pollutants already listed in the standard.

In 2015, however, the MoEFCC proposed stricter limits for all STPs, only to drastically change them two years later. The 2017 proposal was markedly different from the 2015 version, with limits for important parameters (COD, Nitrogen, and Phosphorus) removed. Consequently, the 2017 proposal triggered a court case filed with India's National Green Tribunal (NGT), responsible for environmental litigation. The NGT reviewed a report filed by various academic institutions and the CPCB citing the need for revised standards to protect water quality and issued the latest standards for STPs in April 2019. This order more closely resembled the 2015 proposal.

The MoEFCC appealed to the Supreme Court against the 2019 NGT order, but the Supreme Court upheld the NGT's ruling in June 2021. This move was lauded by environmentalists in the country, as it positively affects the mission to decrease the pollution in India's rivers and water bodies, including the river Ganga.

Since the NGT order requires a high-quality effluent, the sewage treatment plants will be encouraged to recycle or reuse the treated wastewater with little or no need for additional treatment. This will help meet the increasing water demand brought by rising urban populations and industrial growth. It is heartening to know that some Indian municipalities have already started taking initiatives in this regard, with their STPs recycling and reusing treated wastewater for industrial and other purposes.

India is investing considerably in wastewater facilities and networks, planning for the remaining 50% of sewage generated in urban centres. With sustained rapid urbanisation and the requirement to treat sewage from semi-urban and rural areas, the number of STPs needed to treat all of the sewage generated in India is estimated to be 4500 or more.

Both existing STPs that upgrade and all greenfield STPs will need to incorporate advanced technologies to achieve the revised limits set by the National Green Tribunal. Such upgrades and greenfield projects present business opportunities for technology providers, contractors, and equipment suppliers within the field.

Apart from the increase in sewage treatment plants, the Indian government also adopts new financial mechanisms to fund the projects. For example, under the country's water resources department, the National Mission for Clean Ganga (NMCG) introduced the Hybrid Annuity Model (HAM). Under this scheme, 40% of the capital cost is paid by the government, while 60% of capital cost and the entire operation and maintenance (O&M) cost is shouldered by the developer. The government pays the developer over a period (usually 15 years) along with interest  . This has resulted in the entry of a significant number of financial institutions and investors. In addition, the concept of "one city, one operator" was introduced in many areas to ensure efficient management of these STPs. The concept streamlines accountability for the upgrades, operation, and maintenance of sewage infrastructure in the country.

What about sewage sludge?

With immense activity in the industry, India might be remiss not to use this momentum to tackle the regulations surrounding a significant component of sewage treatment besides the effluent discharged into nature: sewage sludge.

The technology used for sludge treatment is chosen based on the final handling method for the biosolids output. There are three main ways of handling biosolids: surface disposal (such as landfills or monofills), incineration, and land application.

Generally, land application is a preferred method as both landfill disposal and incineration present many challenges. Disposing of sludge in landfills causes significant problems as it uses up land - a scarce resource in India; turns the landfills into disease incubators through flies, birds, etc.;  burdens residents with the potential of disease, foul odour, and an often unsightly neighbourhood; and may result in the uncontrolled release of the greenhouse gas methane into the atmosphere. On the other hand, incinerators are expensive to build and maintain, while burning biosolids requires fossil fuels, increasing the carbon footprint of the process.

Land application seems to be the most economical and sustainable option as it promotes an approach to sludge management that supports a circular economy. Land application is utilised by the majority of municipalities around the world that have wastewater treatment facilities. Biosolids can be used as a fertiliser, soil amendment, or soil conditioner and can be applied on farmlands, lawns, parks, gardens, forests, embankments depending on the level of treatment the sludge underwent.

The soil in most India is deficient in carbon, nitrogen, phosphorus, and other nutrients. Municipalities spend money on expensive fertiliser and soils for the upkeep of parks, lawns, and the like. The country also uses inorganic fertiliser that deteriorates soil quality and has a high carbon footprint. Using biosolids as organic fertiliser will not only present substantial savings for the local and national government but will also improve the health of the land.

Presently, many STPs in India already give their biosolids to farmers in agriculture, but this material is not adequately treated and contains pathogens. It exposes both the farmers and the general population, who consumes their crops, to health hazards. To prevent adverse health events, the sludge must be treated to produce pathogen-free biosolids before being given to farmers or used elsewhere. Furthermore, securing the long-term recycling of biosolids to land requires reducing odour to a minimum to avoid popular resistance, following experience in the USA and elsewhere. The United States Environmental Protection Agency (EPA)'s Biosolids Rule prescribes methods for achieving such biosolids. Though many wastewater treatment plants in the USA and the world use Anaerobic digestion (AD) technology, it only achieves Class B biosolids, which are not free from pathogens.  Achieving Class A levels as prescribed by the US standards will require additional treatment.

The management and disposal of biosolids generated from India's existing and upcoming STPs present a tremendous challenge. Sludge treatment has so far been neglected in India as the country does not have any sludge regulations. It is, therefore, not surprising that around 80-90% of STPs in India do not treat sludge, only thickening and/or dewatering it to reduce the final volume to be hauled. As India aspires to become a developed country, the proper treatment of sludge should consist of, at a minimum, anaerobic digestion and dewatering, achieving at least Class B standards.

It is important to note that there is a growing preference around the world to produce Class A biosolids. Worth mentioning are about 130 facilities worldwide that now use advanced anaerobic digestion using the thermal hydrolysis process (THP), of which 74 use CambiTHP®. Cambi‘s THP systems provide utilities with a host of benefits, including (i) lower lifecycle costs versus other advanced treatment methods; (ii) lower space footprint versus conventional digestion, with 60-70% less digester volume required or conversely up to four times as much biogas per biogas reactor volume; (iii) increased biogas production and volatile solids destruction (20-50% increase); (iv) lower biosolids volume for transport, in some cases halving the volume; (v) lower operation and maintenance costs; (vi) better quality biosolids (pathogen-free, little/no odour), (vii) lower carbon footprint versus other advanced treatment methods, and (viii) potential for earning revenue by selling biosolids as bio-fertiliser or soil conditioner.

In India, Mumbai, Delhi, and Chandigarh have already issued tenders requiring sludge to be treated to Class A standards. NMCG has also required all STPs in its jurisdiction to evaluate the option of treating their sludge to Class A levels. It is encouraging to note that various government and regulatory agencies have already taken the initiative to address sludge management problems and are in the process of making policies and regulations.

With many STPs being built, public-private partnership schemes available, and strict discharge regulations in place, the Indian wastewater treatment sector is witnessing unprecedented growth. Municipalities and government agencies show a substantial interest in sludge management and methods that promote a circular economy. Initiatives to recycle and reuse treated STP water will also be better for the industry. In the next 20 years, the Indian wastewater treatment market is likely to flourish with advanced wastewater and sludge treatment technology providers, contractors, and equipment suppliers. The country begins to serve as a model for many developing countries dealing with wastewater and sludge challenges.

Dr. Indra Mitra has 25 years of experience in the Indian and international water and wastewater industry. He is a renowned technological expert in the field, having held leadership positions across companies in the sector and consulting for various public and private entities such as the World Bank, the European Investment Bank, the US EPA, KPMG, E&Y, and PwC. He became a Director for Cambi's Indian market in 2019.

He is an IIT Kharagpur graduate and has a PhD and an MSc in Environmental Engineering from Lehigh University and Vanderbilt University, respectively, and an MBA from Virginia Tech. He was recently awarded the 2021 Indian Achiever Forum's Man of Excellence Award. 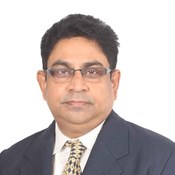