What are you looking for?

1989 - Steam explosion process for the pulp and paper industry

Cambi started as a development company called ”Kambi” in 1989, named after the latin word ‘cambium’ which is the part of the tree where growth takes place. The company was founded by the forest owners association Glommen Skogeierforening, in Norway. The technology was initially used to develop a steam explosion process for the paper and pulp industry. Following promising results in laboratory tests, the focus shifted towards the wastewater treatment sector. In 1992, Cambi was sold to a Norwegian oil trading and distribution company, Petrol Holding, which wanted to diversify into new areas. Cambi was founded to further develop the technology and initiate its commercialization. It was the start of the Cambi Thermal Hydrolysis Process (CambiTHP®). 1994 - Contract with HIAS (Hamar, Norway) for the first full-scale THP plant in the world

The first full-scale THP project in the world was developed by Cambi together with HIAS, in Norway. In 1994, a contract was signed to test and implement thermal hydrolysis for sewage sludge at the plant servicing the town of Hamar. Construction works started that same year and commissioning took place at the end of 1995. 1998 - Collaboration agreement with Thames Water, starting operations in the UK

Building on good performance during the first years of operation in Hamar, Cambi started to look for business opportunities abroad. In 1998, Cambi entered a cooperation agreement with Thames Water in the UK. The two companies established Simon-Hartley Cambi, a JV set to deliver the CambiTHP® process in the UK and Ireland. The first plant in the UK was installed in Chertsey (England) and was commissioned in 2000. Cambi acquired sole ownership of the JV in 2003. By the turn of the century, Cambi had signed several additional contracts to install THP plants - in Lillehammer and Sarpsborg (Norway), Fredericia and Næstved (Denmark), as well as Aberdeen (the UK). An important milestone was reached with the contract award for a CambiTHP® plant at the Ringsend WWTP in Dublin, Ireland. Early in 2001, Cambi started work on its first large-scale project. In 2005, Cambi was contracted to deliver a THP plant for source-separated food waste, industrial biowaste and wastewater sludge, to be treated in a co-digestion facility. The client, Ecopro, is a cooperation of 52 municipalities in the middle and northern part of Norway. This turnkey project was successfully commissioned in 2008. It included Cambi's first installation for sand and grit removal, now marketed as Cambi Gritex®. The Gritex® is great at reducing equipment wear and preventing digester cleaning. 2010 - Launch of B6, with contract for the first compact Cambi plant design

Building on 15 years of operational experience and more than 20 successful projects, Cambi decided to develop a more compact plant for medium-sized projects. It is called B6, as it uses 6 m3 reactors instead of the traditional 12 m3 reactors typical for larger B12 plants. The first contract for a B6 project was signed in 2010, for a plant in Drammen (Norway). Since then, the B6 concept has been refined and standardised into prefabricated modules, significantly reducing the time needed for production and site erection.

In fierce international competition, Cambi won the contract to deliver a turnkey biowaste plant for Oslo's Waste-to-Energy Agency. The plant was designed to process 50,000 tonnes per year of mainly source separated kitchen waste from households. The biogas is refined into bio-methane and liquefied as LBG for use in transportation, mainly biogas buses in Oslo. The end product is a high-quality biofertilizer.

2011 - Breakthrough in the American market with contract in Washington DC

In 2011, Cambi's thermal hydrolysis solution was selected for a major upgrade of the Blue Plains WWTP in Washington DC (USA). This was a breakthrough for Cambi in the US market and raised significant international interest. Cambi delivered four six-reactor streams, handling sewage from about 4 million people. DC Water saved about 200 million USD in digester construction costs, compared to a conventional approach. In addition, there are savings of about 20 million USD every year due to lower transport and energy costs. 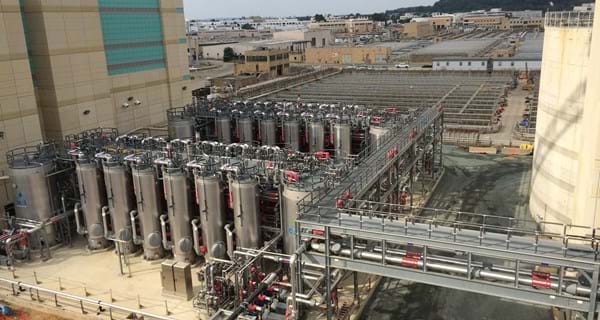 In 2013, Cambi acquired its main supplier for steel products and complete plant modules, the SES workshop in Congleton, England. The modern production facility can deliver most of Cambi's THP systems in-house, as well as ancillaries such as process gas units, coolers etc. Cambi's management and manufacturing processes are ISO 9001:2015 and ISO 140001:2015 certified. 2014 - New record set for contract awards and breakthrough in China

In 2014, a new Cambi design concept was introduced: the plug-and-play, B2 containerized plant. Using 2 m³ reactors, the B2 is optimal for the needs of small to mid-size wastewater treatment plants. Contracts for the B2 were signed shortly after for the plants in Ourense (Spain), Leigh and Burnley (the UK). With short delivery and commissioning times for these projects, they were all online in 2016. The first contract for a B2 project in the US was signed in 2016. Following years of stable operation in Washington DC, in 2017 the US market switched gear for Cambi. Contracts were signed to deliver CambiTHP® solutions at the Clinton River facility in Pontiac near Cleveland and for the Trinity River Authority nearby Dallas.