Sludge treatment facilities have been using the process of anaerobic digestion for over a century to treat, reduce, and make use of sewage sludge. Below is a primer on anaerobic digestion and its products and benefits, an overview of the process and types of digesters, as well as an introduction to its relevance in the wastewater and sludge industry.

What is Anaerobic Digestion?

Anaerobic Digestion (AD) is a set of biochemical steps where microorganisms break down organic matter in the absence of oxygen (hence the word “anaerobic”), primarily producing gases such as methane and carbon dioxide, and the remaining organic wet mixture or residue (called digestate). Anaerobic digestion is used to treat or stabilise food and other organic wastes, reduce greenhouse gas emissions, and extract renewable energy in the form of biogas.

The anaerobic digestion process is utilised by a range of industries, including the agriculture industry for processing manure, energy crops, and agro-industrial waste; the food and manufacturing industries for food processing waste, slaughterhouse waste, pulp and paper liquors, and biochemical waste; and the waste and wastewater industries for municipal organic waste and sewage sludge treatment or management.

The two main by-products of the anaerobic digestion of organic waste can be used in a variety of ways:

Biogas is mostly methane and carbon dioxide with small amounts of other gases and water vapor. It can be refined or purified to just biomethane to increase its commercial value. Biogas is considered as a renewable energy source and can be used as fuel or to produce heat and/or electricity. For the sewage industry, the biogas produced from sludge can be used to help offset the energy costs of a wastewater treatment .

In the wastewater or sewage industry, digestate or digested sludge is often referred to as “biosolids,” and its management represents a large percentage of a wastewater treatment plant’s operational expenditures, often at about 40-%.

What is an anaerobic digester?

An anaerobic digester is the main component of an anaerobic digestion system (also called biogas systems), it is a construction where the anaerobic digestion takes place. These systems can be made using various configurations and different types of equipment, based on the type of feedstock to be treated, the space available, and the final products desired.

There are various types of anaerobic digesters used across industries and can be classified based mainly on two things: the engineering design of the reactor and the design of the digester tank or vessel.

There are various types of anaerobic digesters used across industries and can be classified based mainly on two things: the engineering design of the reactor and the design of the digester tank or vessel.

Digester classifications based on reactor engineering:

Digester classifications based on digester tank or vessel design

In the sewage sludge industry specifically, digester tank designs tend today to be cylindrical, with egg-shaped digesters becoming more popular in Europe and lately in the United States. 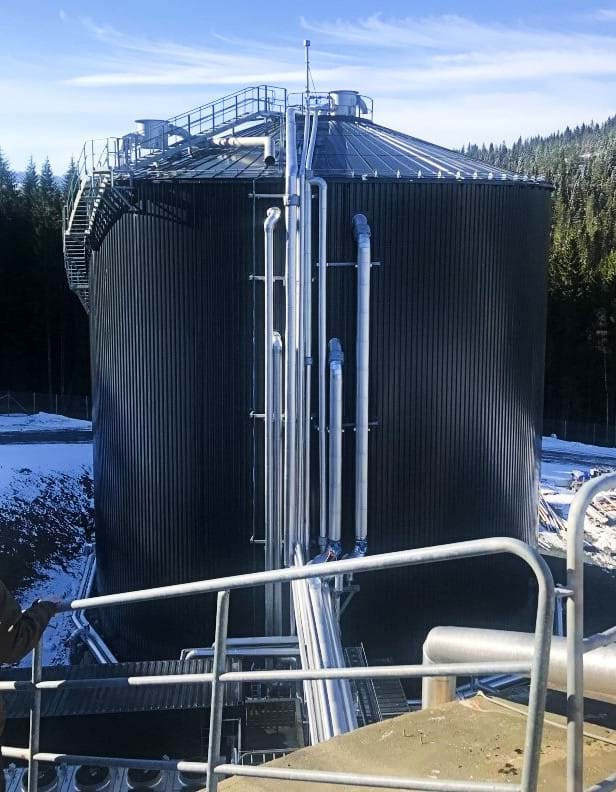 A cylindrical anaerobic digester at a co-digestion plant in Norway

It is important to note that each type of digester has its own pros and cons, and that the nature and quantity of the material to be digested, as well as the supporting infrastructure, are essential in choosing the digester best suited for a facility. Some digesters need hardly any monitoring, such as lagoons and dome digesters. Others will need more sophisticated monitoring equipment, such as temperature transmittors and more high-tech monitors such as those for volatile fatty acids (VFA), online dry solids (DS), and alkalinity.

What are the steps involved in Anaerobic Digestion?

There are four main steps that take place during the anaerobic digestion process, these are hydrolysis, acidogenesis, acetogenesis, and methanogenesis, all carried out by a diverse microbial community in the absence of oxygen. Though these are the main biochemical reactions that happen within a digester, it must be noted that there are other biochemical reactions occurring in the digester not discussed below.

How is Anaerobic Digestion used in sewage sludge treatment?

Wastewater treatment plants that treat sewage sludge can use anaerobic digestion as a stabilisation or treatment method for sludge. A stabilisation process primarily reduces odour and the decay of sludge while lowering the number of harmful microorganisms. Anaerobic digestion, in addition, lessens the volume of biosolids and gains biogas for the plant. Reduction of final sludge or biosolids occurs because in the sludge are turned into biogas.

Where in the treatment flow is anaerobic digestion placed?

Sludge is introduced to the anaerobic digestion system after primary and secondary wastewater treatment (or the activated sludge process) and thickening. Once anaerobically digested, the sludge (at times referred to as biosolids or digestate by this point) is usually dewatered before the final handling method.

What are the benefits and limitations of Anaerobic Digestion for Sewage Sludge Management?

Anaerobic digestion has multiple benefits. It helps many wastewater utilities or municipalities to achieve the following, but with several limitations.

Wastewater treatment facilities worldwide with enough digestion capacity also use anaerobic digestion to digest a combination of sewage sludge and other organics. This is called “co-digestion”. Sewage sludge can be co-digested with fats, oil, and grease (FOG) – a common high-strength liquid organic waste produced by the food processing industry, and with other organic solid wastes such as household or industry food . Co-digestion offers the extra advantage of using food or organic waste as an energy resource without needing to build extensive infrastructure to handle a separate waste stream.

What is Advanced Anaerobic Digestion?